As was widely reported this week, a coach bus which was driving towards Mulhuddart M3 Bridge coming from Blakestown Community College carrying schoolchildren crashed into the bridge underpass beneath the M3.

Anyone who is familiar with the area will know this bridge immediately as it is quite possibly one of the lowest bridges on a busy road in Ireland.

However this was not the first time such a low bridge collision accident occurred here – we just unearthed a archived tweet from the Dublin Fire Brigade from back in 2017;

…the following tweet from only yesterday has a depressing sense of déjà vu; 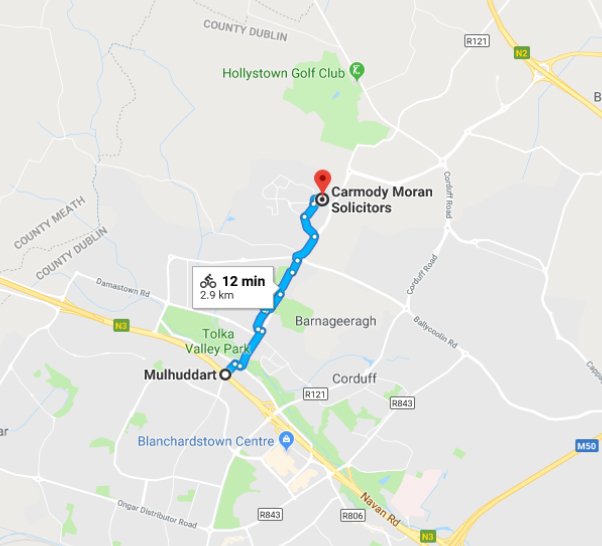 The Mulhuddart M3 bridge underpass is used by commuters to Tyrrellstown and elsewhere.

My firm Carmody Moran are located only a few minutes away so I am very familiar with the bridge underpass as I commute via this location on a near daily basis. It has always struck me as to how unusual it is in terms of its clearance level design. I myself am 6ft 6″ tall and I have often walked under this bridge and every time I do I find myself ducking as I approach it. Even when driving in my car underneath it, you always get the feeling that the roof of the car is going to scrape along it such is the low clearance of it. This is all the more troubling because this is a relatively new bridge. We are all familiar with old railway bridges in particular dating from the nineteenth century whereby either the clearance is low or the width allows only one vehicle to pass at a time but it beggars belief that a bridge which was built in the late twentieth century could have so little regard for future problems with vehicular traffic passing underneath it. We can only echo the comments made by local representatives that this accident is not repeated and that something is done in relation to this particular bridge. (The above does not infer where liability for the accident may yet be apportioned and that is another matter for another day.) Our thoughts are with the children who were injured on the bus and their families and we hope that they make a speedy recovery from any physical or psychological injuries which they sustained in this accident. Hopefully, we will never have to do another post like this and that something will be done to ensure that such accidents do not and cannot happen again.